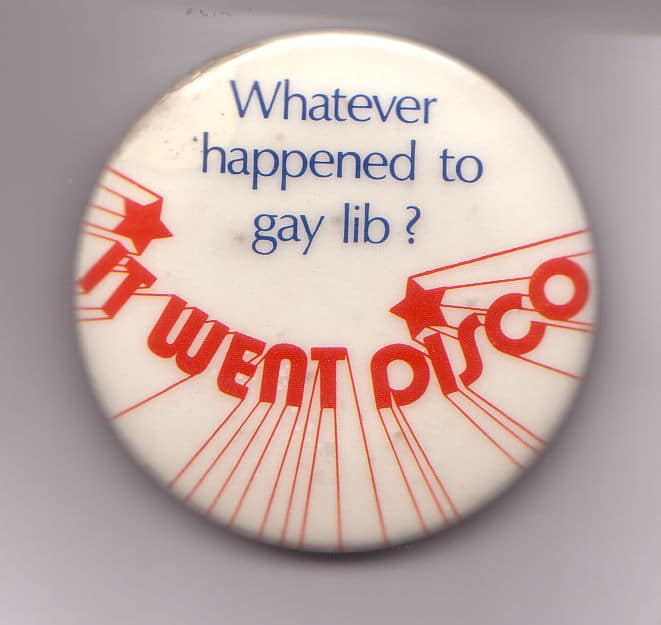 Whatever happened to gay lib? : It went Disco, Badge Collection, 4-31-2

Like most great American culture, disco began black and poor, relying in this case on recorded (and therefore cheaper) rather than live (and therefore more expensive) music.

Traced backed to 1971, it surfaced a couple of years later and by 1975 – the Year of Disco – there were 500 discotheques in New York City alone and heterosexuals were flocking to experience the beat. Van McCoy’s ‘The Hustle’, the Bee Gees, Donna Summer rocketed up the charts.

The shift was the work of gay audiences. In 1972 disco appeared at the Ice Palace on Fire Island. Between ’73 and ’75, word spread, bringing it out of the ghettos and into the mainstream; out of the obscure dark rooms and onto the sunny sidewalks (to quote Andrew Halleran). But the mushrooming discos were almost entirely queer – crowded with gay men and lesbians, expressing and celebrating their new found pride and freedom on the dance floors. The music was ‘our fado, our flamenco, our blues’ (Halleran again), the music that we adopted and made our very own; a music to express our difference, our history, our claims upon the world.

By 1979, though, the rot had set in. The Village People were satirising the whole gay/disco connection (while denying that they were gay, of course). The ‘Disco Sucks’ movement (and how telling is the use of word ‘sucks’ as a term of abuse?) took flight. And for those with a karmic view of the world – an unnoticed virus was starting to spread. The Golden Summer was about to end. 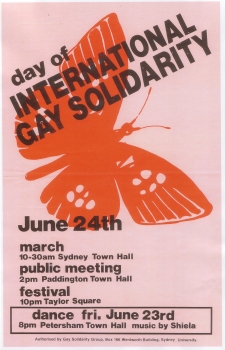 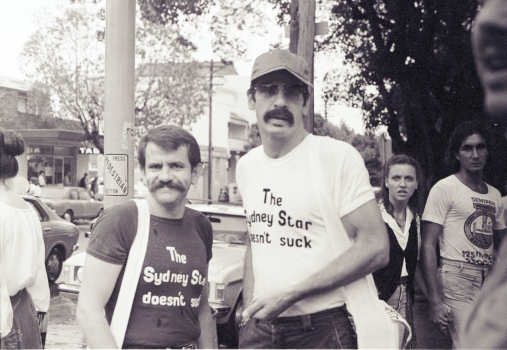