Nick Henderson describes some personal and organisational collections received by the Archives in the last few months. 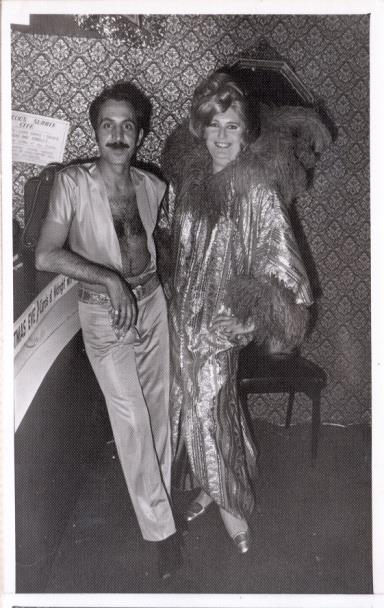 The papers of Dennis (Flo) Fuller document one of Sydney’s most notable and longest-running camp/gay social groups, the Chameleons Social Club / Knights of the Chameleons. The papers are largely comprised of records compiled by Donnie Smith and were passed on to Dennis following Donnie’s death in 1990. This material includes correspondence, newspaper clippings, financial documents, ephemera and associated designs, photographs of performers, membership badges, copies of the Chameleons Social Club Limited Newsletter, No. 1 and 2 (Jan, Feb 1969), etc. The Newsletter is the earliest known Australian camp/gay serial.

The ephemera includes material produced for the Chameleons, as well as additional ephemera for camp parties in the 1960s and flyers for venues including the Trolley Car and the Sky Lounge. Additional material relating to the Chameleons includes correspondence, surveys and photographs received by Dennis in 1995 while compiling information on the history of the group. Also included is a small group of papers from Doug Liddle, largely relating to a 1963 camp party ‘A Royale Ball’ by the ‘Count and Countess of Cammeray’ at Whale Beach, including a guest list, acceptance list, acceptance and apology cards, and a small group of later camp party invitations. Accompanying the papers is a drag costume worn by Dennis at the New Year’s Eve party held at Capriccio’s in 1969-1970.

The Chameleons were established in 1962. Members at the time included Dennis (Flo) Fuller, Brenton Williams, Dawn O’Donnell, Julie Farmer, Connie Johnson, Lennie Williams, Noel (Nola) Beckett and Sonny Ash. The group initially undertook events such as car rallies and dances, the latter in venues like the Salvation Army Hall, Glebe, and the Masonic Hall, Parramatta Road. In 1966 the Chameleons became Sydney’s first legally associated homosexual organisation, subsequently leasing the Masonic Hall on Parramatta Road. Following efforts by police to move them on (they hadn’t obtained a licence to sell liquor, which was being sourced from Dawn O’Donnell’s bar, the Trolley Car), they dropped the lease and folded in 1968. However, some of the committee, including Donnie Smith and Ken (Molly) Fuller, continued the club’s Sky Lounge events as formal balls at the Kei-Ron Reception Centre under the name the Knights of the Chameleons. The Kei-Ron balls continued for the following 15 years, later undertaking a range of social and fundraising events before closing in 1991, after Donnie Smith died in 1990.

The papers of David Wilkins (aka Dot Dingle) document this prominent Sydney gay community identity, community worker and drag queen. The papers largely comprise organisational papers for the Sydney Gay Mardi Gras / Sydney Gay and Lesbian Mardi Gras, David being a member of its board from 1982 to 1990. These complement and extend the papers of Bruce Belcher, held by ALGA, who was on the board during the early 1980s.

The papers of Ulo Klemmer document his working life as a manager at KKK Sauna during the 1970s, and as a Beat Outreach Officer with the AIDS Council of NSW (ACON) during the early 1990s, as well as his volunteer work, particularly supporting organisations such as ACON, the Bobby Goldsmith Foundation (BGF) and Mardi Gras. Ulo has also been active in developing and supporting new acquisitions for ALGA, including through the ALGA Venues Project. Ulo’s most recent addition to his papers includes: ‘beat logs’ and associated material created by Ulo in his role as Beats Outreach Officer for Western Sydney with ACON, documenting his contacts with beat users and the issues faced, 1990-1991; 180 photographs documenting Aarows Gay and Bi Sex Club, Rydalmere (Western Sydney); 43 photographs documenting the ‘police brutality’ protest following the 2013 Sydney Gay and Lesbian Mardi Gras; 12 photographs documenting a marriage equality protest in Manly, 2013; 2 mixtapes from KKK Sauna, c. 1977 (another held as part of a previous donation); documents relating to the Bisexual Men’s Outreach Project, 1991 (ACON and Macquarie University AIDS Research Unit); ephemera for various volunteer work undertaken, including ACON, BGF, Same-Sex Dancesports and Mardi Gras.

The Records of Midsumma largely comprise photographic prints documenting all aspects of Midsumma from its inception in 1989, through to their transition to digital photography in c. 2005. The collection includes over 5000 photographs by a range of photographers, both known and unknown. Photographers whose work is included in the collection include: Angela Bailey, Jason Reynolds, Richard Israel, Mark Munro, Virginia Selleck, Ruth De Bron, Maureen O’Flaherty etc. Events covered include Carnival, Pride March, Ride (Luna Park) etc. In addition to photographs, the collection also includes some publicity files documenting newspaper coverage of Midsumma, audio-visual items (VHS and DVD), 5 banners, 8 t-shirts, and miscellaneous ephemera. Additionally, posters which are not already held by ALGA will be collected in the near future; this includes all post-2002 posters. 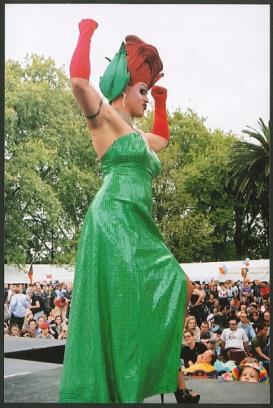 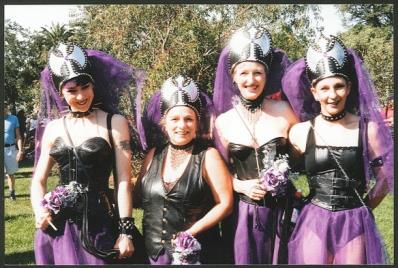 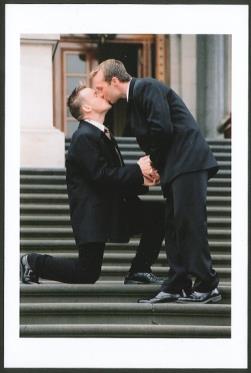 The first instalment of the Les Smith collection documents the career of Brisbane-based DJ Les Smith. Smith got his first DJ job, at the Terminus in Brunswick Street in the Valley, in 1982. The Terminus later moved to the old Alliance Hotel and from there Smith worked at Options. At the same time he was working at the Beat and began working at the Wickham doing 3–5am and Sunday afternoons. When Options closed down he settled permanently at the Wickham. Far from being confined to Brisbane, Smith has DJd at parties across Australia, including Mardi Gras in 2005, Sydney’s Toybox and Box parties, and events like Brisbane’s Big Gay Day and Lismore’s Tropical Fruits. His involvement in Crew Parties has included the Masc., Rigid and Mancamp franchises, and most recently Mu Mu Land. The collection is a wonderful overview of Les’ career, and fills a substantial gap in ALGA’s holdings of posters relating to Brisbane-based nightclubs and events. Further instalments will extend this collection to approximately 200 posters. The Les Smith collection also complements two other recently received DJ collections, those of Sydney-based DJs Stephen Allkins and Bill Morley. 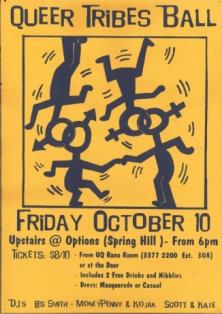 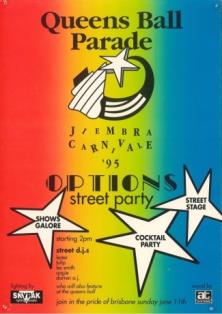 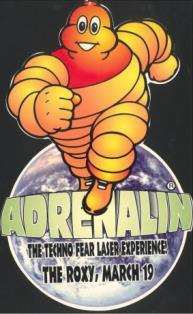 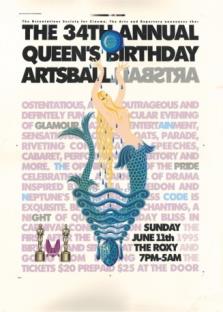 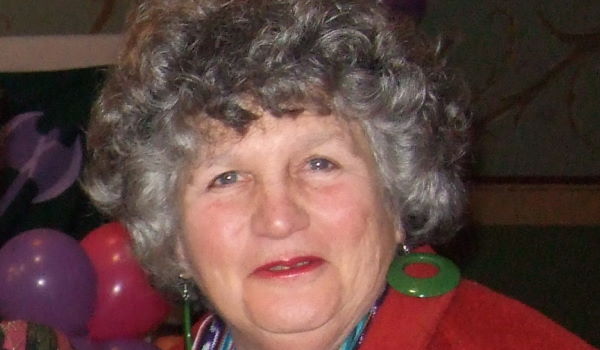