The news in 2002 that the construction workers’ union was taking industrial action to defend the queer room at a Victorian university was by no means the first time that unions have supported gay people in this country. In fact they have a long and honourable history of action.

One of the earliest examples came in 1974 when Penny Short, a trainee teacher at Macquarie University, published a lesbian poem in the student paper. Explicit, in the style of the time, in both sexual and political terms – and proudly signed, of course – it came, inevitably, to the attention of the Authorities.

Some had known already. In the course of the various interviews for her traineeship and scholarship, Penny had let it be known that she was a lesbian; to which it was suggested that she should just keep the fact to herself.

When the poem appeared, her scholarship was promptly revoked – on the grounds that she was ‘medically unfit’ to teach primary students. Clearly, it was not her lesbianism that was the problem, but her openness.

Students – and not just gay and lesbian students – were outraged. A demo of some 600 gathered outside the Education Department’s headquarters, demanding reinstatement of her scholarship. Among her supporters was the Builders Labourers Federation, a union well-known for the Green Bans which had protected so much of Sydney from the developers’ wrecking ball. A union with a social conscience was an obvious source of support and its bans on university building sites brought the issue to the top of everyone’s agenda. 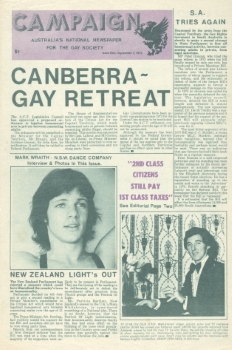